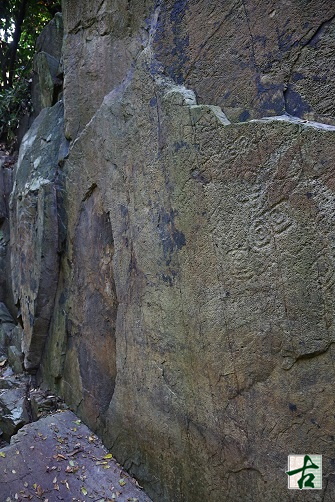 Rock Carvings at Wong Chuk Hang are located beside a stream course at Wong Chuk Hang on Hong Kong Island. Three main groups of carved patterns can be recognised. They consist of meandering and spiral designs suggesting stylised animal eyes. It is most unusual that they stand at least a kilometre from the sea, unlike other rock carvings in Hong Kong, although they still overlook 'a small expanse of water', i.e. the stream running below them.

Rock Carvings at Wong Chuk Hang were declared monuments in 1984.

The viewing platform of the Rock Carvings at Wong Chuk Hang is closed for maintenance until further notice. We apologize for any inconvenience caused. For enquiries, please call the General Enquiry of the Antiquities and Monuments Office on 2208 4488.
Please search the routes of different transportation modes for pre-trip planning.
The above information is for reference only, and is subject to change in accordance with the announcement of relevant organizations.
Back
Declared Monuments in Hong Kong - Hong Kong Island