King Law Ka Shuk was once used as a study hall. Bok Bok Chai (the Chinese traditional teaching method) was practised in the study hall and there was a maximum of forty students at one time. Apart from being used for teaching purpose, the building also served as a venue for clan members to hold meetings and traditional functions. Since the provision of public education by the government in 1948, the teaching purpose of King Law Ka Shuk became less important. However, it still serves as the dominant venue for clan members to hold meetings and ceremonies. 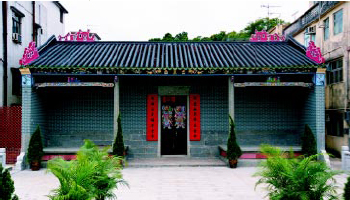 King Law Ka Shuk is a traditional three-hall building with two open courtyards. It is fronted by two drum terraces each having granite columns supporting the roof. The main ridge is decorated with geometric motifs. Beautifully decorated mouldings are found inside the building.

King Law Ka Shuk was declared as a monument in 1998. The original character of the building was inadvertently lost, partly due to its dilapidated conditions resulting from lack of sensitive maintenance. In addition, a restoration project in 1932 had further concealed the traditional disposition of the building by the introduction of modern materials. Consequently, large-scale restoration works to reinstate the original state of the study hall were made possible in 1998 with the consent of the villagers and funding from the government. The restoration works were monitored by the Office and carried out by the Architectural Services Department. Other participants included specialist conservators from Hong Kong, Mainland China and England. Moreover, the villagers from Tai Po Tau Tsuen were actively involved and contributed their valuable comments to the restoration project. 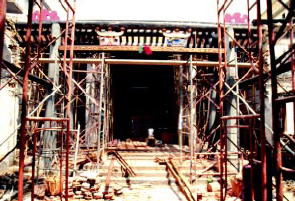 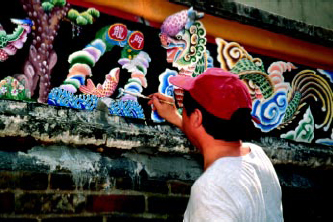 This recent restoration project was indeed a challenging and difficult task. One of the prerequisites was to make a precise recording of King Law Ka Shuk before restoration so as to provide the specialists with a thorough understanding of the hall's history, original materials, as well as design and functions of the building. The Office had therefore commissioned Guangdong Provincial Institute of Cultural Relics and Archaeology to conduct a detailed cartographic survey and to produce working drawings for the restoration project.

In order to successfully restore the study hall to its original appearance, the conservators removed modern materials like cement and steel, which had been added in the 1932 restoration. However, the two original parapets as well as the ancestral altar from Guangzhou of the 1930's were preserved. The work began by dismantling the two parapets in the atrium, then they were assembled again on the green brick wall on both sides of the chambers after careful restoration. Dr. John Hurd, a specialist conservator from England, carried out conservation of the ancestral altar. In addition, the parts damaged by termites and leakage were totally replaced.

During the restoration, village representatives attended regular site meetings, together with the Office, to monitor the restoration and to give valuable comments. The entire restoration project was finally completed successfully in about two years, and King Law Ka Shuk was reinstated to its original charm.

In 2001, King Law Ka Shuk restoration project was recognized as the winner of Award of Merit of UNESCO Asia-Pacific Heritage 2001 Awards for Culture Heritage Conservation and the award presentation ceremony was held at King Law Ka Shuk on 17 March 2002 with the presence of representatives of UNESCO. The project set an example in the application of best practice methodology of renovation and in demonstrating the value of restoration and conservation of a historic building for community use. Carried out through a balanced conservation approach and strong community involvement, the restoration is regarded as an ambitious success in bringing the historic building back to its original state, also integrating some of the more modern elements from the 1930s.

In addition, King Law Ka Shuk restoration project had won the Award of Merit in the Hong Kong Heritage Awards (2001), jointly organized by the Antiquities Advisory Board and the Office. 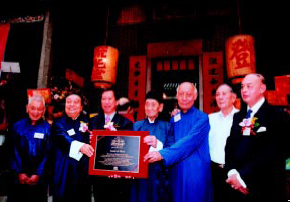 Representatives of the Restoration Committee of King Law Ka Shuk receiving the Award of Merit. 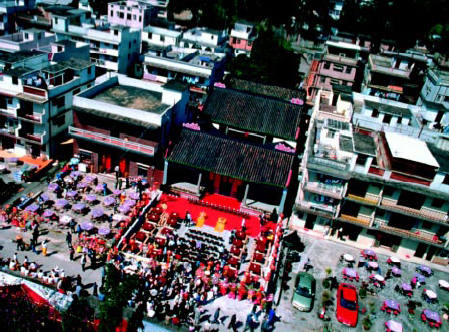