Located in Kowloon Park, once the site of the British Army's Whitfield Barracks, the Hong Kong Heritage Discovery Centre (HDC) is housed in two of the old barrack blocks, S61 and S62, which were probably built in the late 1890s. Starting in 1967, Whitfield Barracks was handed over in stages to the government for redevelopment as a cultural and leisure venue, and the site was eventually opened to the public in 1970 as Kowloon Park. Blocks S61 and S62 were used from 1983 to 1998 as the temporary premises of the Hong Kong Museum of History. The blocks were restored by the Antiquities and Monuments Office in 2003 and subsequently developed into HDC in 2005. The buildings are now used for heritage education and publicity. 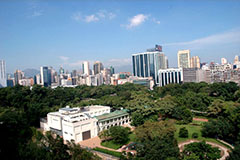 For more information on the history, architectural characteristics and restoration of HDC, please read the pamphlet on HDC or join the guided tour of the "Former Whitfield Barracks After Adaptive Re-use".

HDC may adopt suitable crowd control measures to ensure orderly admission and to tie in with the operational arrangement of Kowloon Park whenever necessary.